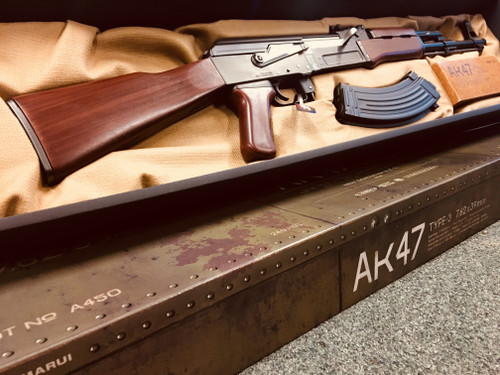 Here at Combat South we have 3 levels of upgrade available for the Tokyo Marui AK Recoil series, available at point of purchase. From a minimal upgrade to all out, we feel that every level has its merit going from strength to strength. These upgrades have been a long work in progress for us with the guns being built to different specs for staff and players and firmly tested on the field to aim to get the best from your AK Recoil series with price being a key factor throughout all the available levels of upgrade.

Upgrades are completed within a week to ten days from point of purchase, with all guns being tested at our lasered and level shooting range. The levels of upgrades are as follows….

*All range tests were conducted on a level, open playing field, both against and with a slight breeze. Temp approx. 19C. Hop on each gun was set to a flat trajectory with no over hop and using a human target. All guns have been tested on 7.4v 1100mah Nuprol lipo’s. All upgraded packages come with 6 months warranty. If you have any further questions regarding these upgrades you can contact us via email or phone, we are always happy to explain and answer any questions you may have.

The latest offering from Marui, the recoil series AK47! A truly beautiful gun and solid throughout!

AK 47 which can be said as the origin of AK series rich in variation. AK47 produced in the former Soviet Union is classified into three types from Type I to Type III due to differences in manufacturing method and
With Shoot & Coil Engine: By pulling the trigger, the bolt is activated at the same time that it is launched, and the intense rebound generated inside the main body is transmitted to the whole body. Also adopts an auto stop system where the firing operation stops when the magazine becomes empty.
It is a model pursuing reality of operation and operability.
Bolt release mechanism: Pull the bolt handle to release the auto stop, with a bolt release mechanism. You can enjoy realistic operating procedures.
Adopted metal parts: We produce a heavy feeling to the eyes by using die casting and press steel for parts of each part, including lower receivers, and a heavy feeling when we got it, realizing high rigidity.
Surface finishing to enhance texture: The lower receiver reproduces the texture of steel black dyeing treatment by applying deflick coat. In addition, we adopt reddish woodgrain finish for hand guards and stocks. It is directing a realistic feeling derived from non-movable real guns and various materials.
Adjustable front / rear site: The front site can be adjusted up, down, left and right with a dedicated adjustment tool. Also, in the rear site, just by changing the position of the slide bar, the plate-like site main body is raised, and the landing up / down adjustment can be performed.
Magazine adapter included: By attaching an adapter to the main unit, a magazine for electric gun standard type AK becomes usable. When installing the adapter, the auto stop system and the bolt release mechanism will not operate. Also, the magazine for the next generation electric gun AK 47 can not be used.
×