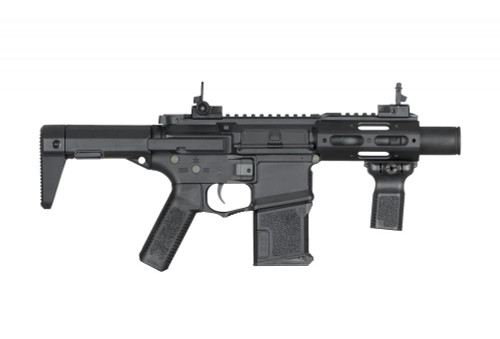 This weapon features alloy internals, outer barrel and sound enhancing mock suppressor. The body of the gun is made of Polymer, making it lightweight yet durable, making it great for CQB by allowing you to turn corners more easily, and play for longer without becoming tired. The flash hider which comes attached to a 14mm Clockwise thread, is designed to look like a miniature suppressor, but is actually in fact a noise enhancer, making it sound louder when fired. The weapon features a stippled effect on the Pistol Grip and Magazine which makes the weapon easier to grip, and features a range of features such as an extended magazine release and larger than normal trigger guard to accommodate for Glove Users. The weapon features a receiver length top Rail, allowing you to attach a variety of Sights and Scopes, and features Long and Short Modular Rail Panels which are attached the Handguard, and can be moved at any time to suit a variety of setups. This AMOEBA style rifle is part of ARES's new EFCS gear box system (Electronic Firing Control System), which allows the gear box to be programmed to be Semi, 3 round burst or full auto using the Ares Amoeba Electronic Gearbox Programmer EFCS. The new EFCS gear box system means the AEG rifle comes with an electronic trigger, meaning an even quicker trigger response! This gun is perfect for those Airsoft Skirmishers who want a unique looking weapon, that is lightweight and durable.

With the fantastic response we’ve had to our S-Hopped Marui NGRS range here at Combat South we have decided to extend this to be available on all new guns when being purchased from us prior to delivery.

So why increase the Power and S Hop? Simply put, to increase its range and accuracy. Further info on S Hops and upgrades can be found in our Service/Upgrades section.

Once all set the gun is set up to run on .32g ammo with the standard manufacturer’s choice of battery. All Weapons are fully tested at our outdoor range before being signed off

Standard turn around is 7-10 days from purchase.

Should you wish to extend the level of upgrade on your new purchase then please contact us for further options.

Any variants in the upgrade process we will contact you directly to discuss this.